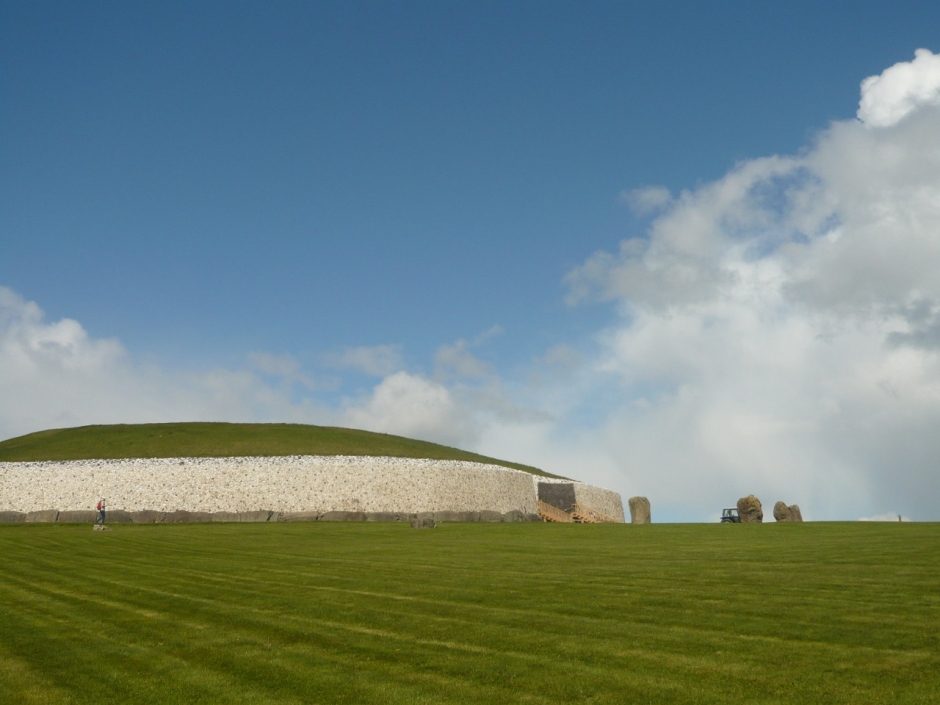 The tombs at Bru na Boinne (meaning mansion or palace of the Boyne) are among the oldest and finest examples of megalithic tombs in Europe. Situated at a bend in the River Boyne, the neolithic cemetery consists of 37 passage tombs, including the three monumental mounds of Newgrange, Knowth and Dowth and clusters of many smaller tombs.

Newgrange is the best known of the tombs. Built around 3200BC it is older than the pyramids and 1000 years older than Stonehenge. Sitting at the highest point of the ridge that the tombs are built across, it can be seen for miles around. The impressive white quartz facade, positioned to face the rising sun, is a reconstruction of what the tomb was thought to have originally looked like.

The entrance to the tomb (below) showing the heavy stone door which would have to have been pushed to the side to gain access, and the highly decorated kerbstone placed directly in front of the entrance, probably blocking the tomb, both physically and symbolically.

Above the door is one of the most ingenious features of the tomb – the roofbox. The window-like opening was made so that the rising sun on the winter’s solstice could shine through it and the beam of light would shine along the passage and illuminate the stones in the chamber. The roofbox was necessary because the 19m long passage goes uphill, making the chamber slightly higher than the doorway.

On the guided tours of Newgrange (which are the only way of visiting the site) you will be taken inside the tomb and the lights will be switched off so you can experience what it would be like to be there at the winter solstice.. In the pitch darkness, a tiny pencil-like beam of light appears, shining down the passage and illuminating the floor of the chamber. As it widens and swings across the floor, the reflected light illuminates the rest of the chamber, revealing the decorated stones and the three recesses in the chamber.

The chamber is a cruciform shape, with three recesses and a corbelled roof which rises upwards to 6m above the chamber. As you enter the chamber there is a recess on each side and one at the rear. Stone basins were usually placed in the recesses of passage tombs, perhaps to hold bones of the dead during rituals. Four stone basins were found in the Newgrange chamber and excavations found the bones of at least 5 people (some unburnt and some cremated). More remains and artifacts were no doubt found by antiquarians and treasure hunters since the tomb was discovered in the 17th century, but few records remain.

Photography is not allowed inside the Newgrange tomb. Instead, some photos of the River Boyne and the footbridge across the river from the visitor centre.