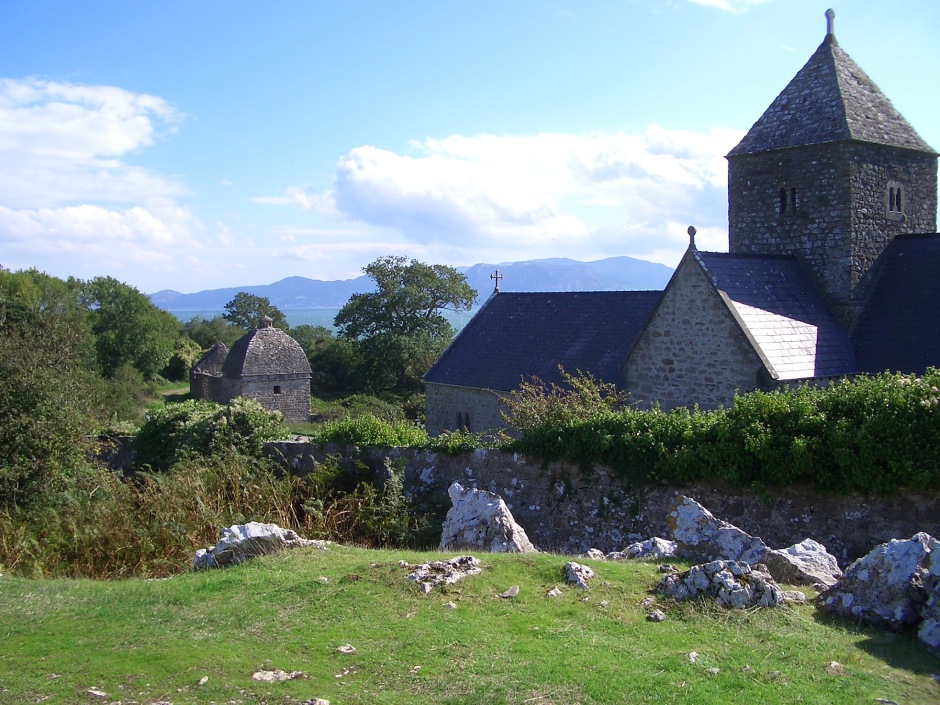 Penmon Priory is one of the most impressive ecclesiastical buildings on Angelsey, with roots going back to the 6th Century and St. Seiriol.  It’s in a tranquil setting at the end of a quiet road in the eastern corner of the island and has views across the Menai Strait to the mountains of Snowdonia.

The original monastery was founded by St Seiriol in the 6th century, a time when there was a trend for monasteries to be built in remote places. Two were founded on Anglesey at this time, this one in the east of the island and another one founded by St. Cybi at Holy Head on the far west side.
It was rebuilt in the 12th century and became part of the Augustinian order in the 13th century. The priory church remained as a church after the dissolution of the monasteries and is still a parish church today.

The cluster of buildings you see today are the priory church, and attached to it, a private dwelling which was once the prior’s house.  Standing beside these is a 3-storey roofless building which housed the refectory on the first floor and dormitories on the top floor.

Beside the priory is a secluded walled garden and some remains from the time of the original Celtic church, including a well, the stone outline of part of a small building and the monastery fishpond.

This lovely old holy well beside the priory is dedicated to St. Seiriol and would have provided water for the monastery. Although the well is ancient the brickwork forming a little shelter around it is 18th century.

Across the lane is a very fine dovecot, built about 1600 to house pigeons which were used  for their eggs and meat.

There are enough nesting boxes for 1000 pigeons!

St. Seiriol also founded a small monastic community on nearby Puffin Island, or Ynys Seiriol (Seiriol’s Island) as it is called in Welsh. He is thought to have spent the last years of his life here.
From the priory you can take the toll road (about 1 mile) to the beach and look across to Puffin Island and Penmon Lighthouse. Some ecclesiastical remains are still visible on the island, including the remains of a 12th century church.

In the 1890’s the island became plagued with rats, probably due to a shipwreck on the shore of the island. The rats decimated the puffin population and by the end of the 20th century the puffins had been virtually wiped out. However, thanks to an RSPB programme to eradicate the rats the puffins have now returned.
1000 years ago the puffins would have been a food source for the hermit monks living on the island and the monks were also reported to have been doing a good trade in pickled puffins!

One thought on “Penmon Priory, Anglesey”