The great ediface of the long cairn at Camster and the neighbouring round cairn is one of the oldest and best preserved Neolithic sites on mainland Britain.
Only it’s location, in this vast empty moorland in the far north east of Scotland has made it relatively unknown compared to, for example, the great prehistoric sites in Wiltshire or Orkney. However, that is changing due to the hugely popular ‘North Coast 500’, a motoring route round the far north of Scotland which is bringing many more people to Caithness and Sutherland and giving lots of publicity to all the places to visit along the route.

Caithness has a wealth of prehistoric sites and driving north up the A9, or A99 towards John O’Groats, brown signs point the way to brochs, standing stones and cairns.

What you see today is one huge long cairn and a round one a short distance away but they weren’t always like that. They started life as three separate round cairns, built around 3,500BC. Sometime after their construction, two of the cairns were covered by an incredible amount of stone to form one long cairn about 70m (or 230ft) long. It must have been built to impress. Not only were the 2 round cairns made into one but the length of it was extended by quite a distance so that it stretched further across the ridge on which it sits.
Horns were added at each end to form forecourts, the main one being at the highest and widest end where the original cairns were.

You can see the stepped platform and walls of the forecourt but these have been reconstructed to show what it probably looked like originally. This design is quite different from other court cairns of Scotland and Ireland, where the forecourts would you usually be formed from orthostats.
Another difference is that there was no entry into the chambers from the forecourts. This is where the ceremonies would have been performed but the entrances to the two tombs are through tiny openings in the SE facing side of the cairn.

Restoration work has made access to all three tombs easy, although you do have to crouch down and crawl through the entrances and some of the passageways are quite low and narrow. Each cairn has a passage leading into a central chamber, where you can stand to full height and where enough light has been provided by skylights and a little light getting in from the entrance, that you don’t need a torch.

Of the two chambers in the long cairn, one is tripartite and the other is a simple chamber.

The round cairn has an anti-chamber and this leads into the main chamber which is tripartite, with pairs of orthostats dividing the 3 compartments. It has a fine corbelled roof and stonework.

When the tomb of the round chamber was opened up by antiquarians in the 19th century they entered from the collapsed roof of the cairn. After clearing the rubble that had fallen into the chamber they discovered that the entrance passage had been completely infilled with stones and rubble to seal off the tomb. This was a common practice when Neolithic tombs came to the end of their use.
Skulls and bones from 2 skeletons were found placed in the rubble.

The scant finds from the 3 tombs included some animal and human bones, ash and charcoal, pottery sherds and flints.

This is an intriguing prehistoric site, about 6 miles away from the cairns (as the crow flies). It is from the Neolithic or early Bronze Age and one can only guess at what it was used for.

On a barren hillside near the coast there are 22 rows of upright stones, all less than 1m high, and radiating out in a fan shape. There are about 250 stones but there could have been many more originally.

From the information board at the site

There aren’t many stone rows in Scotland, at least not of any complexity or size, but for some reason, Caithness has a concentration of them.

The Clava Cairns are a regional type of cairn found in N.E. Scotland, covering an area around Inverness, the Black Isle and along the Spey Valley. They get their name from the Bronze-Age cemetery at Balnuaran of Clava, where the best examples are found.

Unlike the much earlier Neolithic chambered cairns, the Clava cairns were built around 4000 years ago in the Bronze Age and were erected more as places of ritual than tombs for the dead.
The typical design was a round cairn surrounded by kerbstones and a passage leading into a round chamber in the centre. This was then surrounded by a stone circle and other standing stones.

They tended to be built in areas of fertile land and consequently many have had their stones removed and used to build dykes and farm buildings. Often all that is left are a few large stones from the cairn or the remnants of the stone circle that surrounded it, but fortunately, the cairns at Balnuaran of Clava and at Corrimony in Glen Affric are still more or less intact. Both these places are well worth a visit, not just because they are the best examples of Clava Cairns but Balnuaran of Clava, in particular, really does have a special ambience. It is no coincidence that it was the inspiration for Craigh na Dun in Diana Gabaldon’s Outlander books.

Situated down a country road in the Nairn valley near Inverness, the Bronze-Age cemetery is surrounded by trees planted by the Victorians, which only adds to the sacred atmosphere of this enchanting place. On an autumn day the whole site, including the chambers of the cairns, is carpeted in golden and red fallen leaves, making a lovely contrast with the worn grey stones.

The cemetery consists of three burial cairns in a row, each surrounded by a stone circle and other standing stones. The outer two are passage graves with a passageway leading into the central chamber but the middle one is a doughnut shaped ring cairn without a passage into the inner chamber – possibly used as a funerary pyre.

The two passage cairns are aligned to the south west, so that the setting sun shines down the passage when it’s the winter solstice and this is another typical feature of the Clava type cairns. 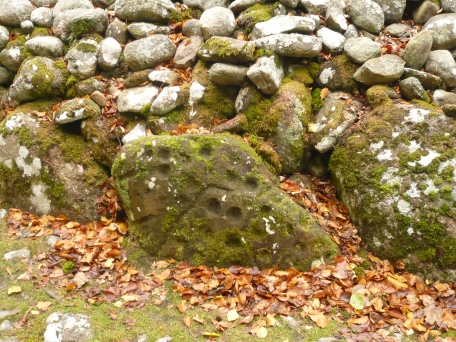 There are several cup-marked  stones and this one has
been used as a kerb stone. 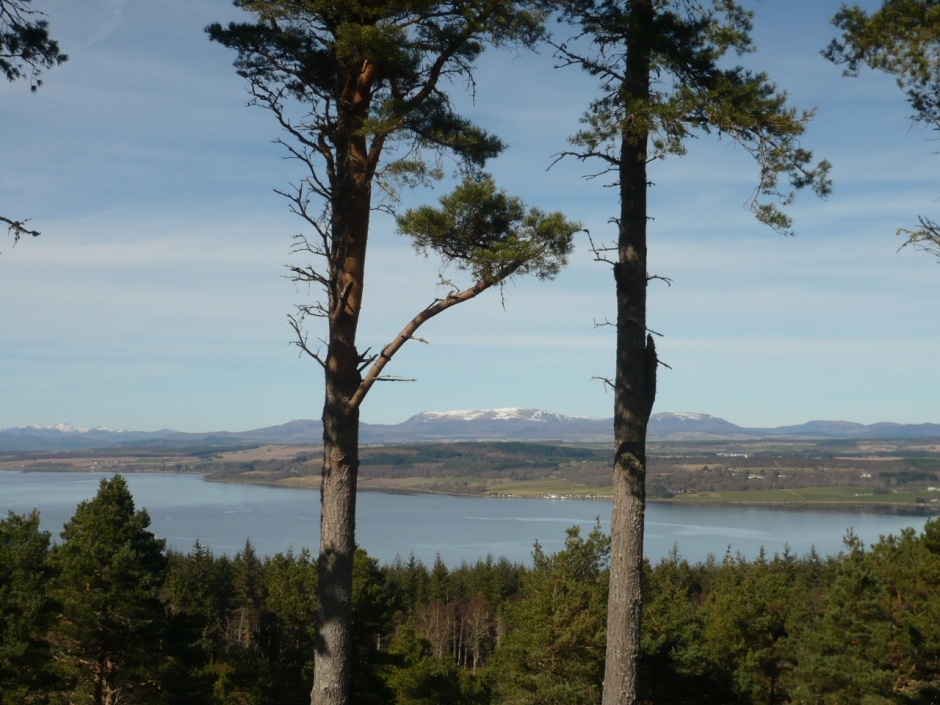 An Iron-Age hillfort on the outskirts of Inverness

Craig Phadraig is a large oval-shaped fort which covers the top of a steeply wooded hill above the Beauly Firth and the city of Inverness. Today, part of the view is obscured by trees but it was built in a strategic position with commanding views of all the surrounding countryside, the River Ness and the Beauly and Moray Firths.

Today the hill is part of Craig Phadrig Forest and from the Forestry Commission car park a number of footpaths meander around the wooded hillside. It would be quite easy to come here and not even realise that there’s such an impressive Iron Age fort right on top of the hill because you don’t see it until you come out of the trees and find yourself standing on the ramparts. As you emerge from one of the steep paths up to the summit you suddenly see the large oval-shaped hollow (75m long), surrounded by the mounds of two concentric ramparts. 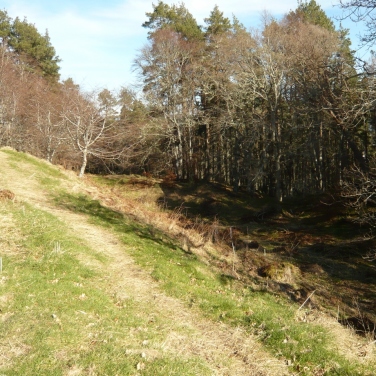 The fort was built around 300BC but soon afterwards it was destroyed by fire and abandoned. The site was used again at later dates, notably as a stronglhold in Pictish times when it is reputed to have been the seat of the Pictish king Brude (Bridei mac Maelchu), who ruled around AD555-584.  St Columba travelled here to meet with him and afterwards, King Brude and his followers converted to Christianity.
Excavations have revealed artifacts from around this time.

The ramparts were originally very high walls constructed from timber-laced stonework and at some point after construction they were subjected to such intense heat that the stones were melted and fused together. Both the inner and outer walls are heavily vitrified, although this isn’t visible today as they are covered by grass.

Vitrified forts are quite common in the highlands of Scotland. I think there are around 60 of them and another example is Dun Dearduil in Glen Nevis. There are also one or two in Ireland.
In the past, archaeologists had speculated that that the forts had been deliberately vitrified to increase the strength of the walls but this would actually have made the stone weaker and more prone to fracturing. It is now generally accepted that vitrification was the result of a deliberate burning of the fort when it came to the end of its use or when it was captured.

The souterrains of mainland Scotland are found mainly in the eastern lowlands, with many in the fertile agricultural lands of Perthshire and Angus.
Raitt’s souterrain is further north, situated on a hillside above the wide flood plain of the River Spey, with views across to the Cairngorms.

It is shaped like a horse shoe, with a short narrow passage at the entrance which leads to a much roomier tunnel with plenty of headroom. The rear of it is stump-shaped, rather than ending in a circular chamber, as many do.

After it was discovered in 1835 it was broken into from the side, destroying a good part of the side and roof but making easy access along the remaining passage.

Nine miles west of Drumnadrochit and Loch Ness, and going towards Glen Affric, a little road on the left takes you into the upland valley of Corrimony.

A whole day could easily be spent here, exploring the chambered cairn and other historical remains and walking in the RSPB nature reserve. 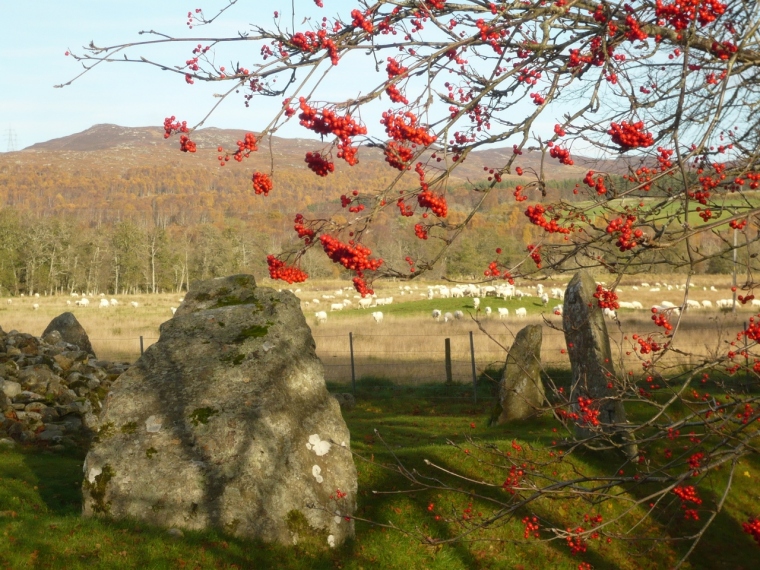 Corrimony Cairn dates from over 2000BC and is one of the Clava-type cairns, common in this part of Scotland. They take their name from the well-known cairns at Balnuaran of Clava,  near Inverness.

The cairn has a passage leading into a well-preserved round chamber and is surrounded by a circle of about 12 standing stones.

The cairn material consists of water-worn stones sourced from the River Enrick which runs through the valley.

A short walk from the cairn takes you to the end of the road and from there you can follow other paths and tracks to explore further.

On the left is Killuradan Graveyard (the graveyard of St. Uradan), thought to have been the site of St. Curitan’s Chapel (around 700-750AD). A 19th century wall surrounds the graveyard and set into the NE wall is a triangular basin stone, probably from the original chapel.

Also at the end of the road, across the hump-backed bridge, is Old Corrimony House, built in 1740 during the time when Corrimony was a barony.

Further up the valley is the site of New Corrimony House, which was a grand Scottish baronial style mansion, from the period when Corrimony was a prosperous Victorian sporting estate. The house burned down in 1951 and only a few traces remain, mainly the  wall from a terrace and some steps which lead down onto grassy slope, below which you can still make out where there was a small ornamental lake.

One feature which still exists is the formal avenue of trees which lined the driveway up to New Corrimony House. Set among these trees is the 6ft high Mony’s Stone. Legend has it that it was erected during Viking times to mark the burial place of Mony, the son of a Danish king.

The car park at the cairn is also the starting point for an 8.5 mile long nature trail through Corrimony RSPB Reserve. The Caledonian forest and moorlands are home to black grouse, eagles, crested tits and Scottish crossbills.